Klaudia//June 5, 2020
Beyoncé Knowles-Carter is encouraging her fans to remain "focused" in the fight for justice for George Floyd.

Floyd, an unarmed black man, died in police custody after former Minneapolis police officer Derek Chauvin pressed his knee on his neck for nearly nine minutes during his arrest. His death has sparked demonstrations in the United States and across the globe.

The Grammy-winning artist shared a poignant message on Instagram Wednesday, which featured an aerial photo of thousands of Black Lives Matter demonstrators filling the streets of Minneapolis, Minnesota.

Accompanying the picture were the words: "The world came together for George Floyd. We know there is a long road ahead. Let's remain aligned and focused in our call for real justice." Klaudia//May 31, 2020
Hi guys! Unfortunately, our previous Facebook page was deleted and I was not able to restore it. I had to create a new one and we're starting from scratch so please help spread the word so everyone can find it again! 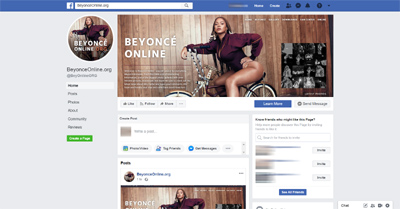 Beyoncé Speaks Out About the Death of George Floyd

Klaudia//May 30, 2020
Beyoncé is speaking out about the death of George Floyd. On Friday, the singer shared a video on Instagram urging fans to seek justice for George by signing the petitions on her website, which include Justice for George Floyd on change.org, #JusticeforFloyd on act.colorofchange.org, and #WeCantBreathe on wecantbreathenational.org.

"If you want to demand more charges brought on all those involved in the death of George Floyd, click the link in my bio to sign the petition."

Klaudia//May 28, 2020
Beyonce sent flowers with a note to Megan Thee Stallion to congratulate her on her first No. 1. Klaudia//May 26, 2020
Megan Thee Stallion's "Savage," featuring Beyoncé, bounds from No. 5 to No. 1 on the Billboard Hot 100 songs chart. The track, which previously reached a No. 2 high after the arrival of its Beyoncé remix, becomes Megan Thee Stallion's first Hot 100 leader and Beyoncé's seventh.

Here's a deeper look at the song's Hot 100 coronation.

No. 1 in sales: "Savage" concurrently climbs 4-1 on the Digital Song Sales chart, up 55% to 30,000 downloads sold in the week ending May 21, according to Nielsen Music/MRC Data, good for the Hot 100's top Sales Gainer award.

The song was on sale in a variety of physical/digital combination offerings during the tracking week, including autographed CD and vinyl copies put up for purchase in Megan Thee Stallion's webstore beginning May 15. Consumers could purchase CD and vinyl singles, each with a digital download; the download would be sent to consumers upon purchase, with physical versions due to arrive at a later date. Beyonce Spotted in Beverly Hills (May 22)

Klaudia//May 24, 2020
Beyonce was spotted on Friday driving in a car in Beverly Hills.

Klaudia//May 23, 2020
Beyonce posted on her website to celebrate the 19th anniversary of the "Bootylicious" single, as well as Naomi Campbell's 50th birthday. Klaudia//May 21, 2020
Megan Thee Stallion locks up the No. 1 spot on Billboard’s R&B/Hip-Hop Airplay chart as “Savage,” featuring Beyoncé, rises from the runner-up rank on the list dated May 23. The duo takes over thanks to a 5 percent boost to 27.3 million in audience in the week ending May 17, according to Nielsen Music/MRC Data.

With their ascent, the Houston natives return female artists to the chart summit for the first time in nearly a year. The last woman at No. 1 was Cardi B, who posted the last of 20 straight weeks in charge through “Money” (nine weeks) and then “Please Me,” (11) a collaboration with Bruno Mars, on the June 15, 2019, list.

“Savage” gives Megan Thee Stallion her first leader on the chart, after a trio of prior top five showings. Her debut hit, “Big Ole Freak,” reached No. 5 in May 2019, while two later hits both went to No. 3: “Cash S--t,” featuring DaBaby last September, and “Hot Girl Summer,” a collaboration with Nicki Minaj and Ty Dolla $ign, in November.

Beyoncé nabs her eighth visit to the penthouse to tie Alicia Keys for the most No. 1s among women since the chart began in 1993. The superstar also ends a five-year drought from the summit, having last topped R&B/Hip-Hop Airplay with “7/11” in February 2015. Between the two chart champs, Bey logged eight other entries, with six entering the top 10. Lemonade single “Sorry” was the most successful, climbing to No. 3 in July 2016. Klaudia//May 19, 2020
YouTube announced Beyoncé, Jennifer Lopez and Taylor Swift will be among those joining “Dear Class of 2020,” punching even more star power into its virtual commencement ceremony for this year’s quarantined graduates.

More than two dozen additional artists, celebrities and influencers will participate in the livestream, set to kick off Saturday, June 6, at 3 p.m. ET/noon PT. They will join previously announced headliners President Barack Obama and Michelle Obama, who are delivering commencement addresses, alongside K-pop powerhouse BTS, Lady Gaga, and more. @chloexhalle DO IT out now Klaudia//May 11, 2020
Megan Thee Stallion's "Savage," featuring Beyoncé, rises from No. 4 to No. 2 on the Hot 100, sparked by Beyoncé having joined on a remix. (Beyoncé now shows on the title on the Hot 100 for the first time, following the first full tracking week for the remix, which drove the majority of overall activity for the song.) Already the former's first top 10 on the chart, Beyoncé achieves her 19th.

On Digital Song Sales, "Savage" holds at No. 2, gaining by 90% to 50,000 sold. "Savage" was on sale in physical/digital combination offerings during the tracking week, whereby consumers could purchase any of three vinyl singles with a download; the download would go to consumers upon purchase, with vinyl versions set to arrive at a future date.