Klaudia//February 7, 2023
Even more new dates have been announced for The Renaissance World Tour! Tickets go on sale tomorrow (February 8) at 10 AM.

Klaudia//February 6, 2023
Originally released in 1979 with its sights set on enhancing the visibility of runners at dawn and dusk, the adidas Nite Jogger has since been reserved for a myriad of disparate collaborative efforts from Twitch streamer Ninja to Beyonce’s widely-adorned IVY PARK line. Having kicked off the new year with a revamped adidas Top Ten 2000, Queen B’s revered brand is now returning to the iconic adi running silhouette, albeit with an outdoorsy twist.

Following a four-year hiatus, IVY PARK returned in 2020 with a slew of Three-Stripes models, including a mass influx in the now lifestyle-reflective model. Three years later, the brand harkens back to the 80s-synonymous silhouette with an adventurous aesthetic, surrounding its greyscale upper stitched with bright orange accents in an allover semi-translucent rubberized cage. Ditching its mid-foot stripes for a simplistic, clad upper, the mudguard’s suede textile dawns a contrasting ever-so-light grey and olive composition. Lightened by faded pink quarter overlays, the tongue’s plush construction features an additional sampling of olive with embossed cream tabs while underfoot, the revitalized ensemble renders a crisp white BOOST midsole with hits of orange and pink finishing along the tread.

While we await further release details, enjoy official images of the IVY PARK x adidas Nite Jogger 7.0 below in the meantime. 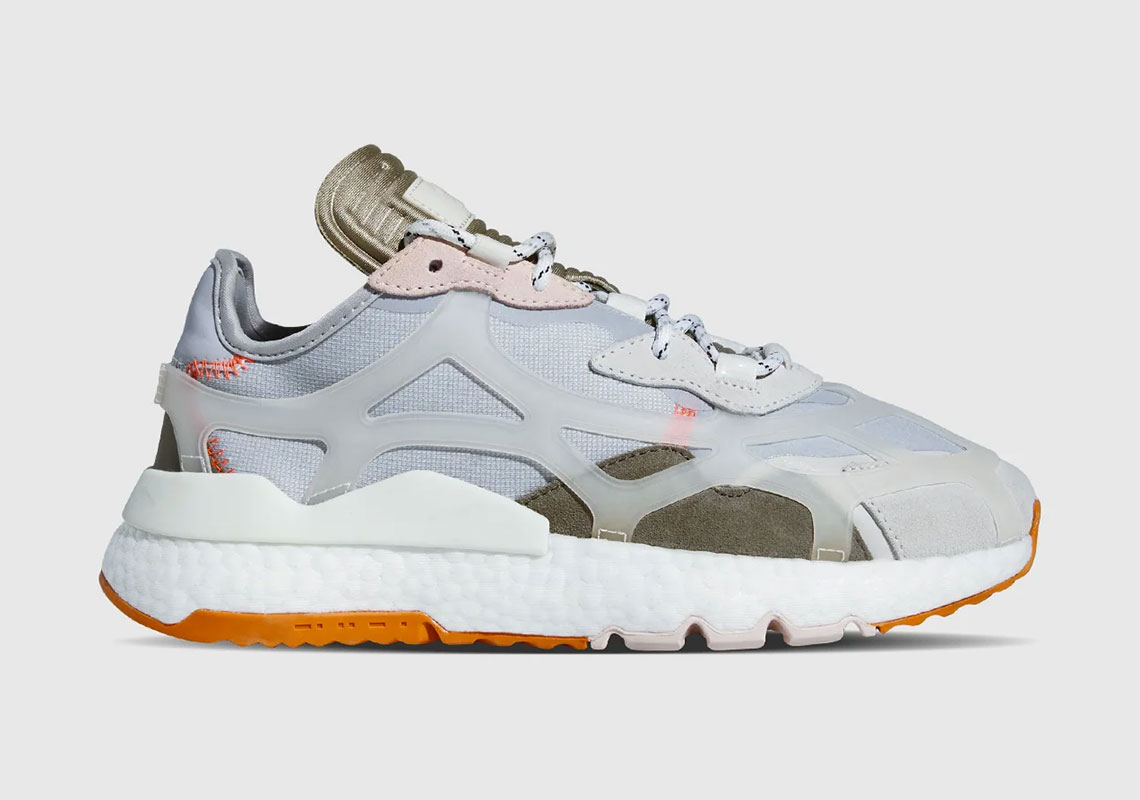 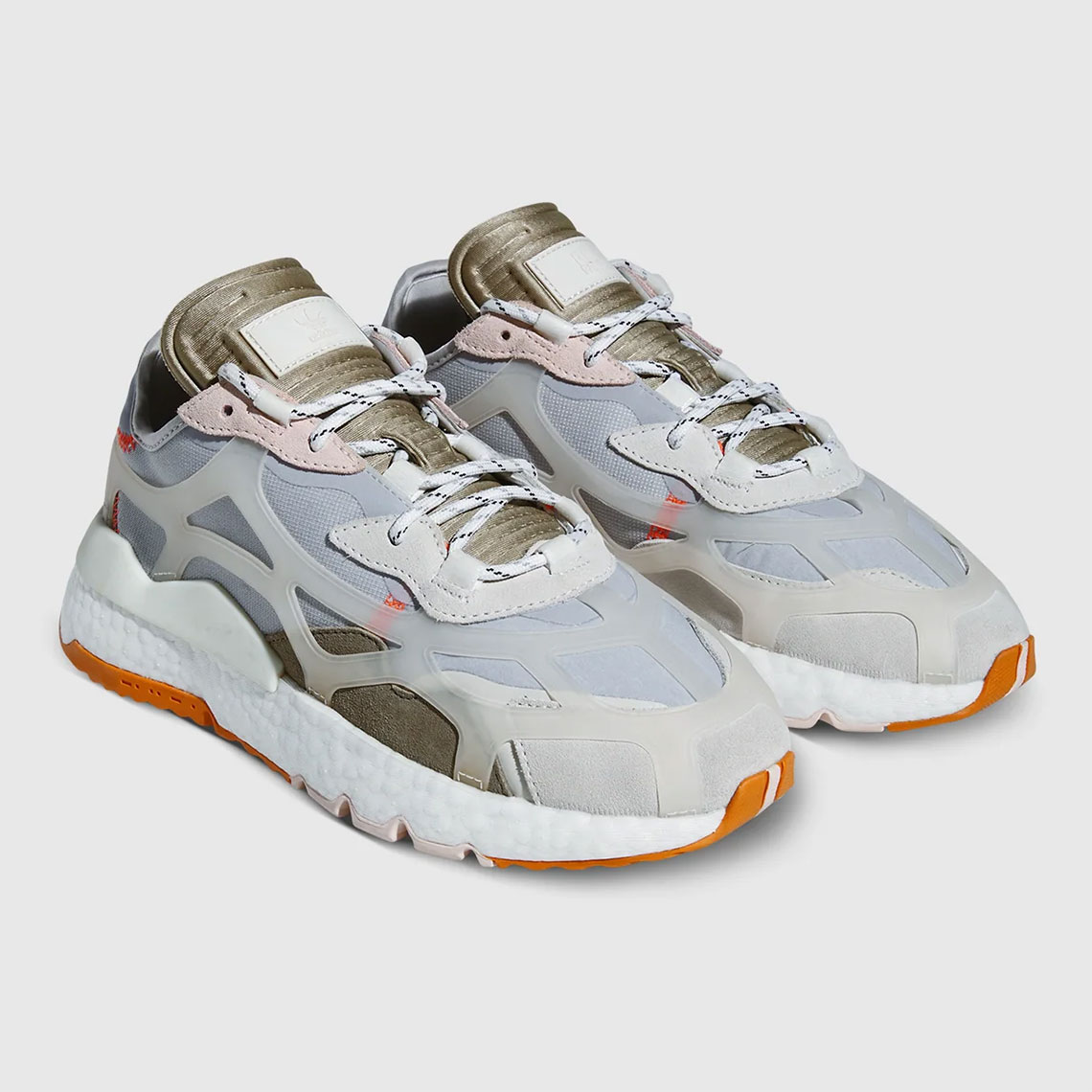 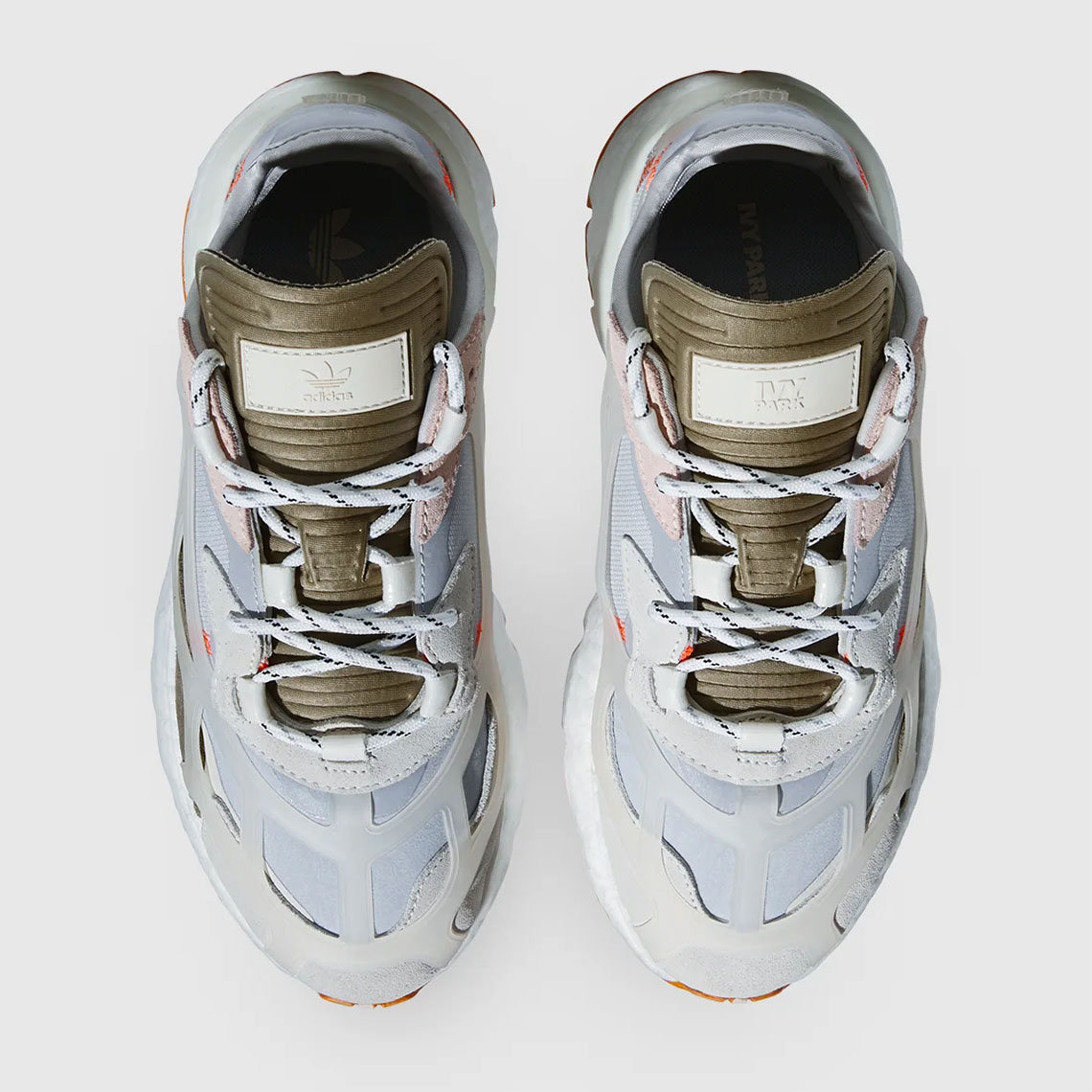 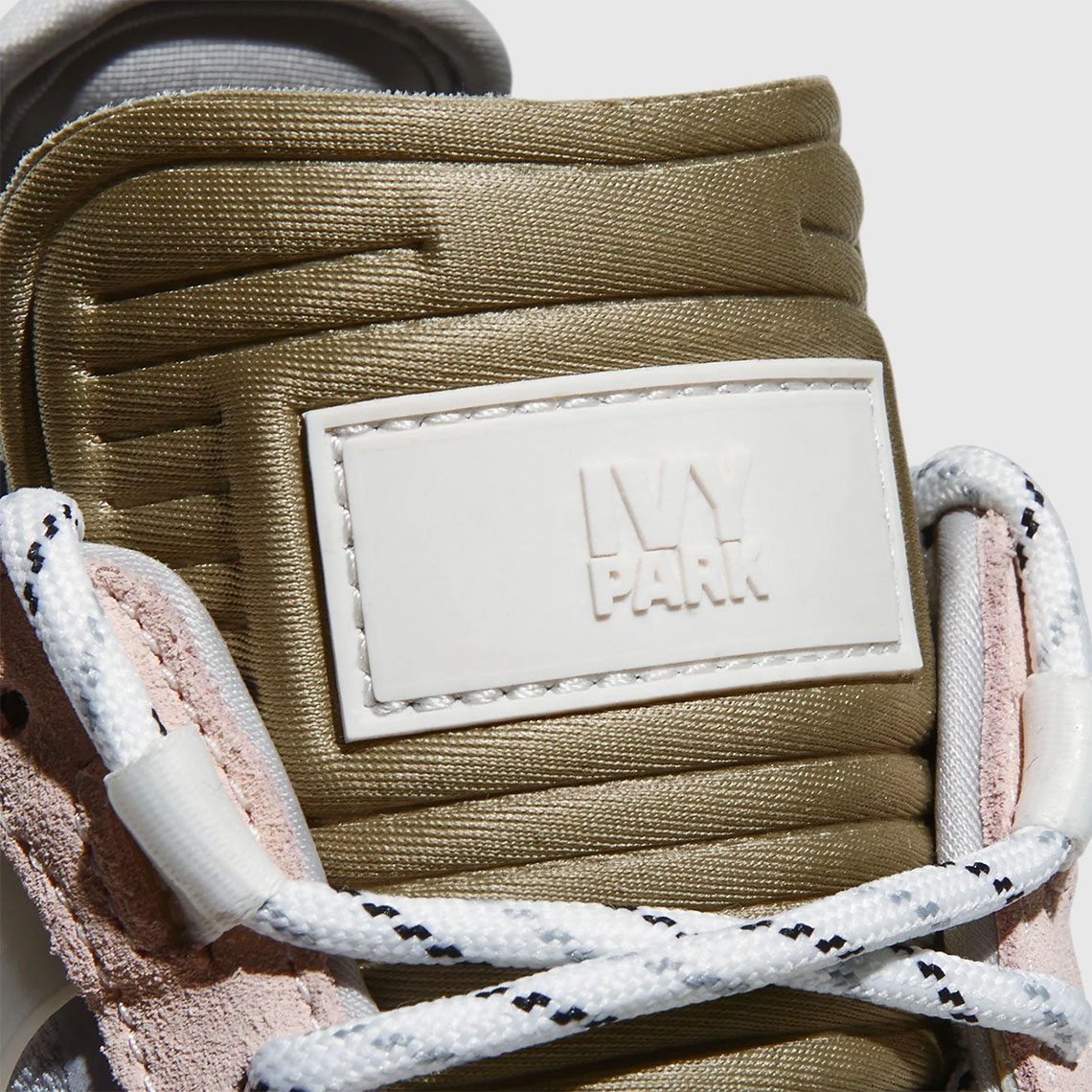 Klaudia//February 6, 2023
A capella and instrumental versions of "Cuff It" are now available on Shop Beyonce along with the album version and the previously released Wetter Remix.

Klaudia//February 6, 2023
Beyoncé attended the 65th GRAMMY Awards at Crypto.com Arena on February 5, 2023 in Los Angeles, California. With her four wins for Best Dance/Electric Recording (“Break My Soul”), Best Dance/Electronic Music Album (“Renaissance”), Best Traditional R&B Performance (“Plastic Off the Sofa”) and Best R&B Song (“Cuff It”), the singer became the most awarded artist in Grammys history, with a record 32 wins. Bey took to her Instagram to thank for the awards:

To my Hive, thank y’all so much for all of your love and loyalty! Big thank you for the BREAK MY SOUL and CUFF IT wins!!! To The Dream, Tricky, HOV, and Big Freedia. I love y’all!

Syd, I’ve always been such a fan of yours. Thank you.

Nova Wav, Morten Ristorp, Raphael Saadiq, and Nile Rodgers, thank you for pouring into CUFF IT.

Big thanks to Sabrina Claudio, Nick Green and Patrick Paige II. PLASTIC OFF THE SOFA is my favorite song on RENAISSANCE most days. It’s hard to pick though. Haaa.

It feels great to be honored for the vocal performance. Thank you to all the talented vocalists who killed those beautiful TikTok renditions!

Klaudia//February 5, 2023
Beyonce attended the Roc Nation's Pre-Grammy Brunch at a private residence in Bel-Air on Saturday.

Klaudia//February 4, 2023
A new photo from the Atlantis The Royal Grand Reveal Weekend in Dubai has surfaced online.

Beyoncé's former dancers hankering to get on her upcoming tour

Klaudia//February 4, 2023
Beyoncé has announced her first tour since 2018 — and while fans are thrilled, some of her former dancers might be sweating.

“With a world tour comes a whole new staff and that includes the dancers, bandmates and backup singers. It’s out with the old and in with the new,” pointed out one insider.

“Her last tour was the ‘On The Run Tour II’ back in 2018 with Jay-Z. So she will be sure to deliver– but with a new tour comes a brand new staff so she has been auditioning a whole new team.”

The diva’s “Renaissance” tour will kick off its North American leg on July 8 in Toronto, we previously reported, with subsequent stops in US cities including Chicago, New York City, Boston, Atlanta, Miami, Las Vegas, Los Angeles, Houston and New Orleans, among others..

“The old dancers are free to audition once again to regain their spots but Beyoncé will be more open to fresh new young talent taking on the reigns,” said an entrainment source.

“She is looking for young women and men — and also a few new band members as well — to take on the new positions on her team.”
Read more
News & Rumors, Tours

Beyoncé is full of surprises. After announcing her highly anticipated “Renaissance World Tour” earlier this week, she has shocked fans again, but this time with the drop of “CUFF IT (Wetter Remix).”

The remix to the fan-favorite record was released on Friday (Feb. 3). Where the original album cut of “CUFF IT” is upbeat, Beyoncé opted to slow it down, making the already sexually suggestive song that much more sexy and sultry.

The track is a mashup of Queen Bey’s original vocals and the instrumental to Twista’s 2009 hit, “Wetter.” The Grammy Award-winning artist upped the ante by adding additional ad-libs and new lyrics at the top of the song. On it, she sings: “Baby make it rain/ Don’t let go till it storms again/ I pray this will never end.”

DJ Esentrik is behind the new cut. As the remix was released to Beyoncé’s website, he tweeted, “Soooo I’ve been hiding this for a while and now I can finally say it! ‘CUFF IT (WETTER REMIX)’ IS OFFICIAL! Thank you to Beyoncé, Parkwood, and most importantly the DJs and fans that supported this from the start! Love to all!”

As most of the BeyHive is probably aware, the popular DJ is known for doing creative mashups of popular hits. He first merged “CUFF IT” and “Wetter” in October, and it instantly blew up on TikTok, where the “CUFF IT” challenge has been thriving for months. Twista also acknowledged the release of the remix. In a tweet, he wrote, “Happy Friday,” while sharing a link to the track.

Her new remixed offering is only available via her website, so click here to check out Bey’s flawless vocals.
Read more
News & Rumors, Photos, Music, Audio

Demand in certain cities exceeded available ticket numbers by over 800 per cent.

Registration for the BeyHive pre-sale for Group B and Group C cities is still open at beyonce.livenation.com.

You can see the full list of dates below:
Read more
News & Rumors, Tours

Klaudia//February 4, 2023
As with previous tours, Beyoncé will make her mark offstage, too, with BeyGOOD, the initiative she founded in 2013 to support people and programs around the world. BeyGOOD will continue its legacy of philanthropy, building out this focus on economic equity by supporting organizations that serve marginalized and underserved communities with access to scholarships, opportunities for internships that lead to job placement, and resources to support entrepreneurship.

In various cities throughout the tour, BeyGOOD will support entrepreneurs through Black Parade Route luncheons, celebrating small business owners, with grant opportunities being awarded and a foray of services with global partners to promote business sustainability. One thousand small businesses will be supported with a commitment totaling one million dollars.

BeyGOOD will also support students through scholarship funds that will be given to colleges and universities in ten different cities along the tour. Each school will be given one hundred thousand dollars and will select the student recipients. BeyGOOD’s total scholarship commitment during RENAISSANCE WORLD TOUR will be one million dollars.

Working with Beyoncé and the BeyGOOD Foundation, Citi and Verizon will purchase 100 tickets combined in each market across the U.S. touring leg for distribution to local community initiatives.

A noted partner with Beyoncé, Tiffany & Co. is the official jeweler of RENAISSANCE WORLD TOUR. Tiffany & Co. has a longstanding commitment to conducting itself responsibly, sustaining the natural environment, prioritizing diversity and inclusion, and positively impacting the communities in which it operates.

Klaudia//February 1, 2023
Beyonce is nominated in three categories at the 2023 Kids Choice Awards. The ceremony is set to air live on Saturday, March 4, at 7 p.m. (ET/PT) from the Microsoft Theater in Los Angeles. Check the nominations below:

Beyoncé reportedly set to bring her Renaissance tour to Australia

Klaudia//February 1, 2023
Beyoncé is set to bring her Renaissance world tour to Australia next year.

Daily Mail Australia can reveal that tour promoters have been working hard to try and bring the American super star Down Under and that 'dates have been locked in'.

'They've been planning it for a while and dates have been locked in. It's 100% happening, an announcement is imminent,' the insider revealed.

The Grammy award winner is set to pocket millions when she headlines shows in Sydney, Melbourne, Brisbane, Adelaide and Perth before playing shows in Auckland.

Beyoncé's Renaissance tour will kick off in May, with the Break My Soul singer expected to visit towards the end of 2023 or at the beginning of 2024.
Read more
News & Rumors, Tours

Beyoncé announced her long-awaited tour for her seventh studio album "Renaissance" on Wednesday to kick off Black History Month.

The album, which debuted in July, is an ode to Black queer culture. Disco anthems, soulful ballads and sexy lyrics are packaged together in "Renaissance."

Beyoncé's world tour kicks off in May and ends in September. Ticket information is available on her website.
Read more
News & Rumors, Photos, Tours

Klaudia//January 28, 2023
Drake and Beyoncé are leading nominations at the 2023 Urban Music Awards alongside Stormzy and a host of other artists. The hip-hop/R&B/soul-centered event is happening on February 28th at the Porchester Hall in London. Given the ceremony’s focus on both U.S. and U.K. artists, there’s a lot of variety in these picks.

Starting with Album of the Year, nominees include Her Loss and RENAISSANCE from the aforementioned U.S. superstars. Another leading force was Stormzy, who’s also nominated in this category for This Is What I Mean. Other nominees include Little Simz’s NO THANK YOU, Knucks’s Alpha Place, and Kojey Radical’s Reason to Smile. The list continues with Chris Brown’s Breezy, DJ Khaled’s God Did, Cleo Sol’s Mother, and Dave’s We’re All Alone in This Together.

Also, they nominated both Drake and Beyoncé in the U.S. section of the Artist of the Year award. They face Chris Brown, Lizzo, DJ Khaled, Cardi B, Coi Leray, GloRilla, Latto, 21 Savage, Megan Thee Stallion, Nicki Minaj, and Jack Harlow.

Voting is now live and will remain open until February 20th. You can find the link to register and vote here.
Read more
News & Rumors, Music, Awards

Klaudia//January 28, 2023
Beyonce and her husband Jay-Z touched down at the Van Nuys Airport in Los Angeles on Thursday. After her performance in Dubai, the Carters reportedly went to the Maldives for a family vacation and stayed at the Waldorf Astoria Ithaafushi resort.

Klaudia//January 22, 2023
Superstar singers Beyonce and Madonna will go head-to-head this summer as both stars embark on global tours.

Former Destiny’s Child singer Beyonce, 41, is expected to announce dates for the European and US legs of her Renaissance stadium tour early next month.

Beyonce will hit the road as early as May, performing to crowds of up to 80,000, sources revealed.

It is not known whether she will play Wembley, but insiders claim the Single Ladies singer has bagged the Stade de France near Paris for May 26.

A US source said: “Dates have been booked and arrangements are being made. Bey and her team have been rehearsing in secret for weeks to make sure the show is perfect.

“She is known for her incredible performances and she has been working hard to make sure this is her best tour yet. With Madonna touring and Taylor expected to follow suit, Beyonce is determined to stand out from the crowd.”