Beyonce Invites Journalists and Influencers to Dubai for Luxury Weekend

Klaudia//January 21, 2023
Last July, Beyoncé unveiled the long-awaited Renaissance, a multi-Grammy-nominated, critically vaunted album that explicitly celebrated queer dance music. She has not yet announced a tour behind the album, but this weekend several journalists and celebrities might be the first to see the singer perform live for the first time since a Kobe and Gianna Bryant tribute set in 2020. (At the Oscars last March, she aired a pre-taped performance of her King Richard song, “Be Alive.”)

Per an invitation that many publications (including Pitchfork) received from the musician’s team, the singer is hosting an all-expenses-paid luxury weekend in Dubai, taking place January 20 to 22. The invite is for the unofficial opening of Atlantis the Royal hotel, and begins as follows: “Beyoncé invites you to a weekend where your dreams become your destination. You and a guest are invited for epicurean feasts, beachside indulgences, and special reveal experiences including business class airfare, first-class ground transportation, and first-class accommodations at Atlantis the Royal.” A “once in a lifetime performance” is mentioned, too, but without any artist attached to it.

The Dubai weekend has been sparsely reported, with UK tabloid The Sun reporting in December that Beyoncé was planning an hourlong performance at the city’s luxury resort Atlantis the Royal. A source told The Sun that Swedish House Mafia would DJ at an afterparty, which is also confirmed by the invitation.

Earlier this week, TMZ shared purported footage of Beyoncé’s soundcheck for an event at Atlantis the Royal, which included songs like "Naughty Girl," "Halo," "Spirit," "Freedom," "Crazy in Love" and "Drunk in Love." The outlet speculated that Beyoncé was paid $24 million to perform in Dubai. Beyoncé’s formal involvement with the weekend and events is so far unspecified.

Per the email, activities for the weekend include dinners at Nobu Dubai, fireworks shows, and a party for the launch of Kendall Jenner’s 818 Tequila. There's also supposed to be a big announcement at the end of the show. The hotel opens to the public in February. 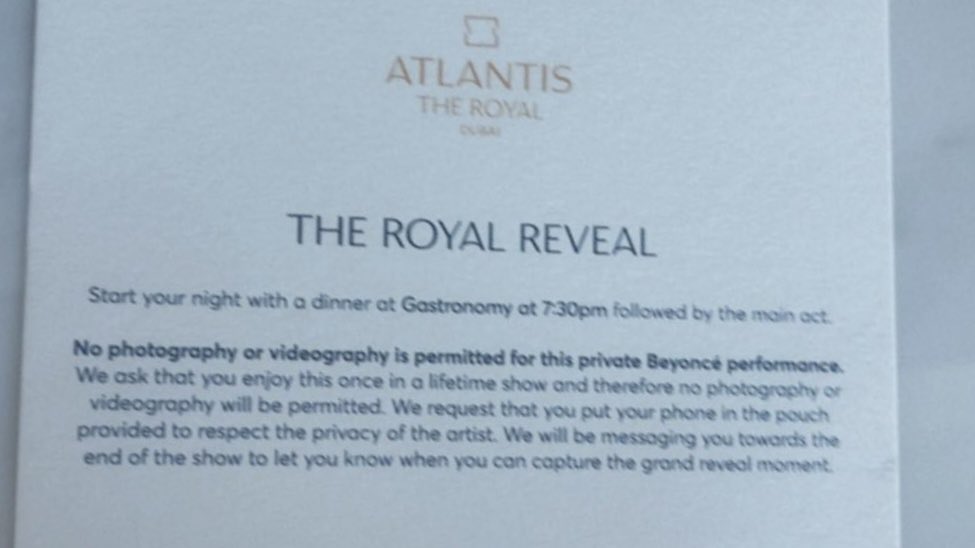