Klaudia//August 9, 2022
Beyoncé has more music to share with fans.

Ron Isley and his wife Kandy first teased the blockbuster collaboration in an interview with Variety in June 2021.

Klaudia//August 9, 2022
Days after the "Queens Remix" of Beyoncé's summer hit "Break My Soul" rose to the top of the music charts, the hitmaker sent Madonna the sweetest gift to say thanks.

Today, the "Material Girl" singer shared photos on her Instagram Story of the fresh white floral arrangement and lovely note she received from Bey. The card read, "Thank You, Queen. I'm So Grateful For You. You Have Opened So Many Doors For So Many Women. You Are Masterpiece Genius. Thank You For Allowing Me To Sing In Your Song And Thank You For Naming The Remix!!!! Love Always And Forever, B."

Madonna replied to Beyoncé with the same heartfelt enthusiasm. "♥️♥️ thank you !! From one 👑 to another 👑 I love the Re-Mix ! @beyonce ♥️♥️," she wrote over each photo. 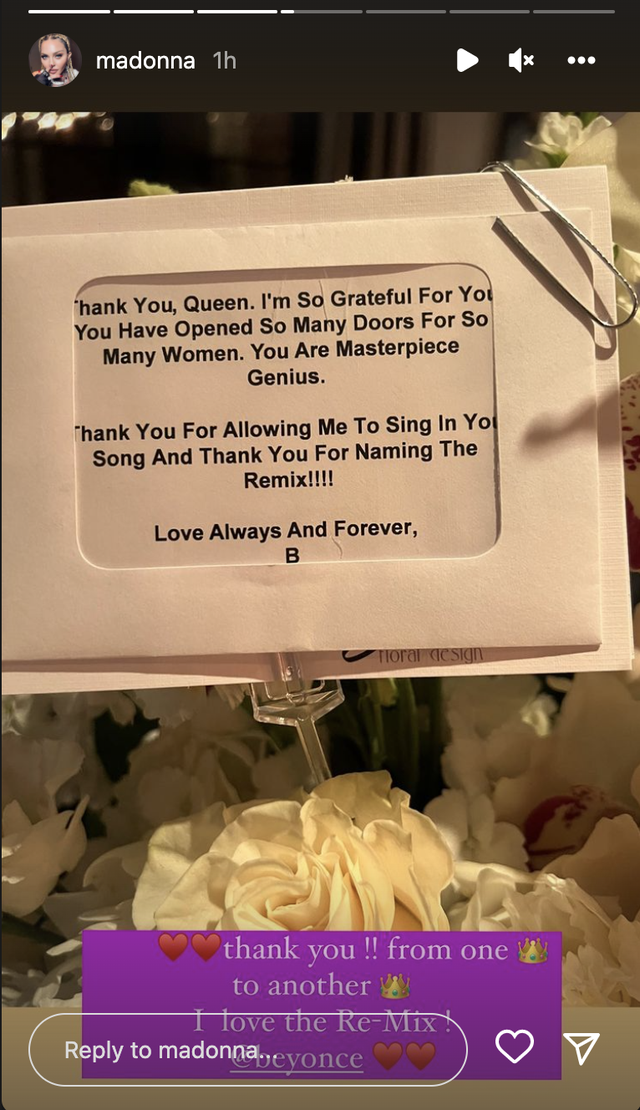 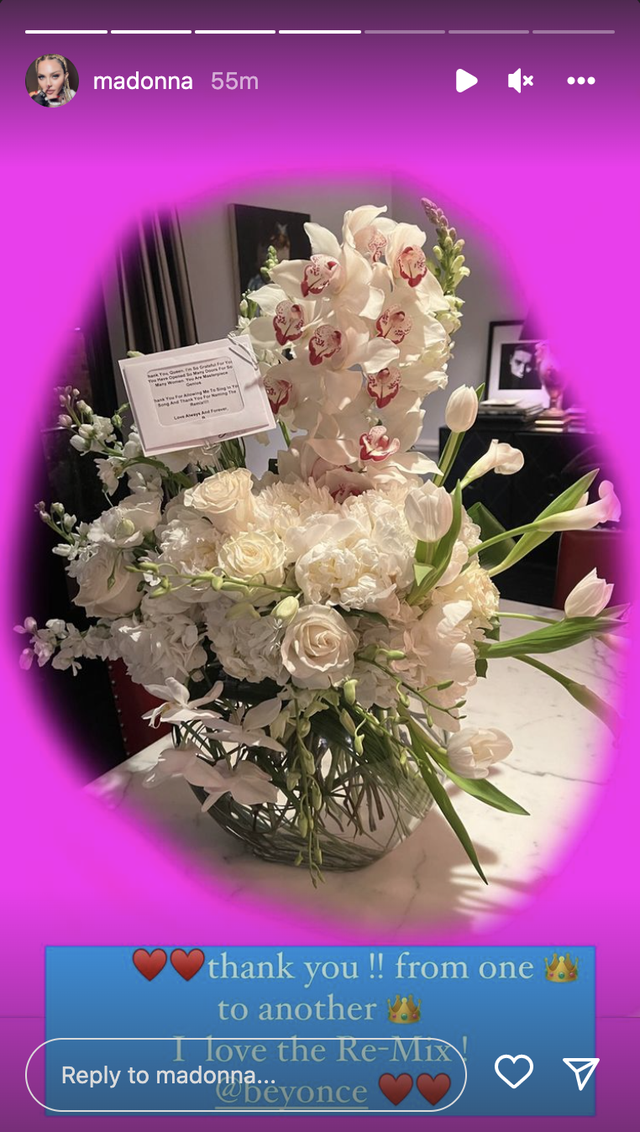 Beyoncé Sends All 16 Songs From 'Renaissance' Onto Billboard Hot 100

Leading Beyoncé’s total on the Hot 100 is the album’s single, “Break My Soul,” which jumps 6-1, becoming her eighth solo No. 1.

Here’s a recap of Beyoncé’s entries on the newest Hot 100. (All are debuts except for “Break My Soul.”)

Klaudia//August 9, 2022
Official visualizer for “BREAK MY SOUL” (THE QUEENS REMIX) by Beyoncé and Madonna.

Klaudia//August 9, 2022
Beyoncé's renaissance is just beginning, and fans and stars are all excited for what's in store for her new era. The icon released her highly-anticipated "Renaissance" album on 29 July, already her seventh No. 1 solo album and the biggest debut from a woman artist this year, as per Billboard. So how did Beyoncé celebrate her big release? With an extravagant, star-studded party aptly called Club Renaissance, of course.

Beyoncé also invited members of the House of LaBeija (featured on HBO Max's "Legendary"), one of the many houses she shouted-out on her Madonna-assisted "Break My Soul" remix, which released the same day of her party. There's no telling what else Beyoncé has up her sleeve, but since "Renaissance" is just act one of her three-act project, there should be more exciting surprises on the way.

Klaudia//August 9, 2022
Beyoncé‘s “Break My Soul” bounds to No. 1, from No. 6, on the Billboard Hot 100 songs chart. The song marks the superstar’s eighth solo leader on the list. The track, which debuted at No. 15 six weeks earlier, is from her new LP Renaissance, which launches as her seventh No. 1 on the Billboard 200 albums chart.

The track vaults 25-3 on Streaming Songs and holds at its No. 4 high on the Radio Songs chart.

In addition to its original version on Renaissance, “Soul” was available in six alternate forms during the tracking week: its Honey Dijon, Terry Hunter and will.i.am remixes; its Nita Aviance club mix; and a cappella and instrumental versions. (Its “The Queens Remix,” with Madonna and which shouts out a host of influential Black female entertainers, arrived Aug. 5, the first day of the tracking week for next week’s Billboard charts, dated Aug. 20.)
Read more
News & Rumors, Music, Charts, Rankings & Ratings

Beyonce's 'Renaissance' Bows at No. 1 on Billboard 200

Klaudia//August 8, 2022
Beyoncé’s Renaissance blasts in at No. 1 on the Billboard 200 albums chart (dated Aug. 13) with 2022’s biggest week by a woman – and the second-largest week of the year overall – as the set launches atop the chart with 332,000 equivalent album units earned in the U.S. in the week ending Aug. 4, according to Luminate.

Notably, Renaissance – Beyoncé’s seventh solo No. 1 album – is the first album released by a woman in 2022 to top the Billboard 200. The last woman at No. 1 was Adele with 30, which ruled for its first six weeks on the list (charts dated Dec. 4, 2021-Jan. 8, 2022). Notably, both 30 and Renaissance were released via Columbia Records (with Renaissance issued through Parkwood/Columbia).

Renaissance is Beyoncé’s seventh solo studio album, and first since the chart-topping Lemonade in 2016. Since then, she teamed with husband Jay-Z on The Carters’ Everything Is Love (2018), released Homecoming: The Live Album and led The Lion King: The Gift soundtrack (both in 2019; all three reached the top five of the Billboard 200). All seven of her solo studio albums have also opened atop the tally (outside of her output as part of Destiny’s Child), starting with Dangerously in Love in 2003.

Unlike Beyoncé’s last two solo albums (Lemonade and her self-titled set in 2013), Renaissance wasn’t a surprise release. The new set was announced in mid-June, preceded by its first single “Break My Soul” on June 20, and was available to purchase on physical formats (both CD and vinyl LP) by street date (July 29). Comparably, her last two solo studio sets before Renaissance were both initially available exclusively only through streamers and digital retailers, and their physical release came later.

Also, unlike her last two studio efforts, Renaissance was not ushered in alongside a longform visual component – or, in fact, any official music videos. The Lemonade project debuted initially on HBO through its same-titled film, while her self-titled effort was initially sold exclusively through iTunes accompanied by 18 music videos. As of Aug. 7, no official videos for Renaissance have been released – only lyric videos and visualizers.
Read more
News & Rumors, Music, Charts, Rankings & Ratings

The superstar’s acclaimed seventh studio album outsells its closest competition 3:1 to reach the summit. Prior to this, Beyoncé reached Number 1 with debut LP Dangerously in Love (2003), 4 (2011) and Lemonade (2016). As a member of Destiny’s Child, Beyoncé boasts another chart-topper; with Survivor going the distance in 2001.

RENAISSANCE’s chart-topping release sees lead single BREAK MY SOUL fly up four spots to a new peak of Number 2 on the Official Singles Chart. Excluding her 2010 appearance as a featured artist on Lady Gaga’s chart topper Telephone, BREAK MY SOUL is now Beyoncé’s highest-charting solo hit in 14 years, since If I Were A Boy hit Number 1 in 2008, and secures the UK’s most downloaded track of the week.

BREAK MY SOUL (THE QUEENS Remix)

On Thursday (Aug. 4), Queen Bey’s “Cliquebait” version of “Break My Soul” was released, adding a fun club remix to an already dance-heavy track. The accompanying YouTube video features the star dancing atop the silver horse on her latest album cover.

Updated Versions of "Heated" and "Energy"

Klaudia//August 4, 2022
Beyonce uploaded updated versions of "Heated" (without the word "spaz") and "Energy" (without the Kelis sample) on all platforms. Klaudia//August 2, 2022
Only a few days have passed since Beyoncé’s newest album, Renaissance, changed our lives. But the release wasn’t completely without controversy. The Grammy winner is now facing backlash over a lyric that contains an ableist slur.

The disabled community called out the pop star’s song “Heated,” which includes the lyrics, “spazzing on that ass, spaz on that ass.”

According to the Merriam-Webster dictionary, in the U.S., spaz is popular slang meaning “go crazy,” which is its intent within the lyrics of “Heated.” But the word, while generally used to mean the latter domestically, is an ableist insult in the U.K. and other countries (including to some people in the U.S.) since it refers to the medical condition spastic paralysis. In a statement sent to Insider, a rep for Beyoncé confirmed that the lyric will be changed. “The word, not used intentionally in a harmful way, will be replaced,” the statement said.

Meet Nova Wav, the Songwriting and Producing Duo Behind Half of "Renaissance"

Klaudia//August 1, 2022
Two years ago, songwriting and producing duo Nova Wav first chatted with Beyoncé over pizza about what would become her seventh full-length album: “Renaissance.”

Released on Friday, the 16-track record is filled to the brim with infectious, danceable tracks, and Nova Wav — made up of Brittany “Chi” Coney and Denisia “Blu June” Andrews — are honored to have a hand in eight of the songs. The duo, who has produced and written for Jay-Z, Rihanna, Ariana Grande, Kehlani, DJ Khaled, H.E.R., Jazmine Sullivan and more, first met Beyoncé in 2014. In 2020, they struck gold as writers on Beyoncé’s single “Black Parade,” which went on to win a Grammy for best R&B performance. So when they got the call to work on “Renaissance” in the midst of the pandemic, the duo was more than ready to dive in.

“She wanted people to feel like they were escaping,” June tells Variety of Beyoncé’s vision for the album. “We’re outside again, and even if things are still iffy right now in the climate of the world, she gave us something to dance to and something to feel good about.”

Below, Nova Wav breaks down a few of the songs on “Renaissance” — including writing “Cuff It” and “Summer Renaissance” after a trip to the strip club — gushes over Beyoncé and shares what the album means to them as women in a male-dominated field.
Read more
Music

Klaudia//August 1, 2022
Beyoncé released the official visualizer for "BREAK MY SOUL".

Beyonce is now on Giphy 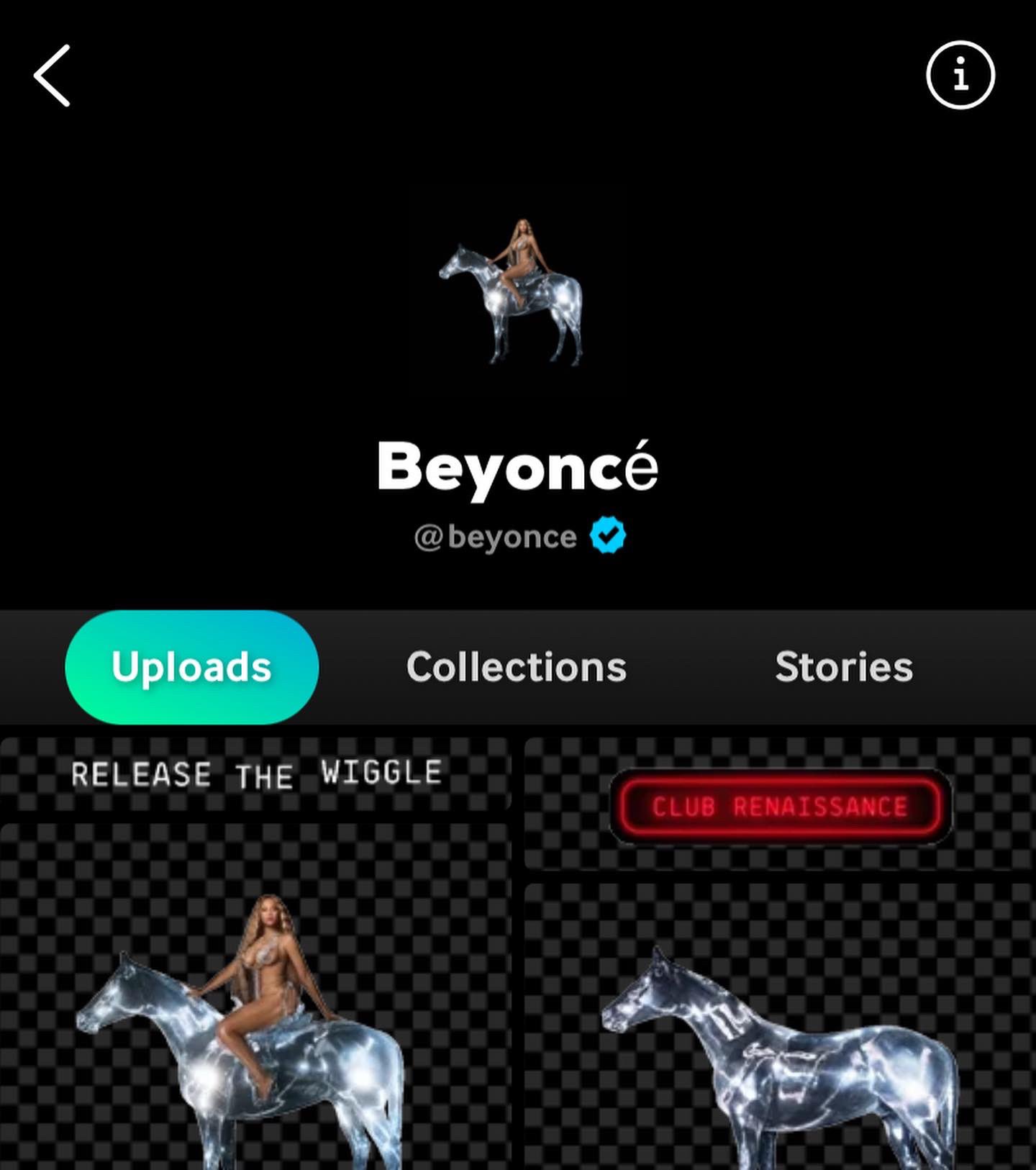 Klaudia//July 30, 2022
Beyoncé‘s Renaissance era is about love in all forms, and in an open letter alongside the freshly released album, the superstar dedicated the 16-song set to her children, her husband, and her family as well as LGBTQ+ “pioneers” — particularly her late Uncle Johnny.

“A big thank you to my Uncle Johnny,” the letter reads. “He was my godmother and the first person to expose me to a lot of the music and culture that serve as inspiration for this album. Thank you to all of the pioneers who originate culture, to all of the fallen angels whose contributions have gone unrecognized for far too long. This is a celebration for you.”

In response to the sweet dedication, Bey’s mother Tina Knowles took to Instagram to share her own memories with her beloved nephew. “This dedication was beautiful ! It included my Nephew Johnny on this photo with me when I am 38 years old he is 40 we are at a club he made this dress for me it was so cute!” she wrote alongside a photo of the open letter.

She continued, “Johnny was the closest human being in the world to me we were inseparable growing up ! Later He was my nanny / housekeeper / designer / Dance partner / confident and bestie. I laughed constantly with him and trusted him unconditionally! When he died a piece of me went with him . Solange and Beyonce worshiped him . He helped me raise them. And influenced their sense of style and uniqueness!”

Knowles went on to reveal that Johnny made Beyoncé’s prom dress, which the singer references in Renaissance track, “Heated,” when she chants, “Uncle Johnny made my dress/ That cheap Spandex, she looks a mess.”

“I got so teary eyed,” Knowles said of the lyric. “You see Johnny loved house music ! And introduced my kids to it early on. He is smiling from Heaven at Bey right now ! Saying you did that Ms Thing !! We love you Johnny and we miss you constantly . Wish you were here to dance with me we would tear it up!!!”

Visuals for "Renaissance" confirmed to be coming at "a later date"

Klaudia//July 30, 2022
In the official press release for the album, Bey and her Parkwood team have confirmed that visuals for "Renaissance" will be coming at "a later date":

"While the visuals are scheduled for a later date, the album comes with a robust menu of formats giving music fans and collectors plenty to choose."